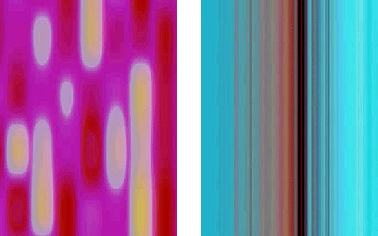 Bio:
Eric Pajot was born in 1966. After a degree in graphic design and cinema decor(set), Eric trained himself on digital imaging softwares and worked for several years as a graphic artist and as an artistic director in several industries: multimedia, internet and magazines.

Additionally, in 1992 Eric created with a friend a radioshow “Radiomentale” which was broadcasted on Radio FG (Paris), in Swissland and Tokyo. This radioshow has now evolved into a “sound creation duo” covering different aspects from sound design to mixing, djing and composition.

“Always divided between my graphical work and music, thanks to the DVD, I’m now able to reunite theses two passions”.

A series of wallpapers based on light micrographs of bacteria and mould spores found on mobile phones during normal everyday use shown at 1000x magnification. These are part of a major sci-art collaboration lead by artist Anna Dumitriu entitled The Normal Flora project, which involves culturing bacteria and moulds from the artist’s domestic environment, a multimedia installation is planned for 2006.

Project Information:
With the increasing number of flat screen TV sets, the television as an object, can now be regarded as an artful display, an item designed to fit a decoration or an environment.

Thus the idea of creating a brand new type of programmes, an alternative to classical TV programmes, is an interesting concept. It would enable to associate appearance and substance in order to transform the television into an harmonious object.

TV sets can now be used as a vivid video painting which can be either ignored or hypnotizing. They can be an esthetical entity matching the user’s mood, an interior design or a type of screen.

Several editorial projects are in development, and a series of 6 videos have been released for the FIAC 2004, at the gallery.