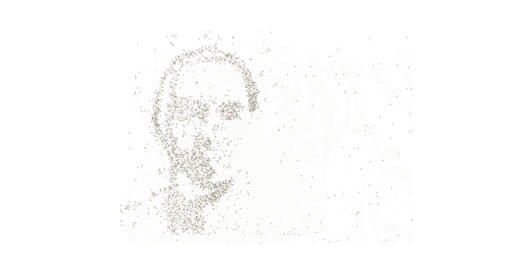 Bio:
Ramie Blatt was born in Montreal, Canada, in 1966. He graduated with a degree in physics from McGill University and later studied anthropology and fine arts. Ramie has built a career as a multimedia and software developer while also exploring many interests: nature, travel, humanitarianism, writing, meditation, yoga, filmmaking and art. He has lived in and experienced diverse landscapes and scenes in the Americas, Australia, Oceania, Europe and Asia. Ramie now lives in Miami with his wife, Kaylin; they are expecting twins.

“I See(the) You” is an interactive artificial life installation, currently showing at “MOVING IMAGE: Video, Animation and Software Art” at Alonso Art Gallery in Miami, to November 25, 2006.

This is a Flash-based installation with video camera. It generates hundreds of ants that swarm randomly. Occasionally, they swarm into a pattern, tracing out the viewer’s face. The image soon fades and the ants swarm again.

A small scale version of this piece called “iCU” for mobile devices (iPod, cell phone) will react instead to any image selected, such as from a cell phone’s camera.

A demo of “iCU” is available at my artist web site, using my own image. www.ramieblatt.com